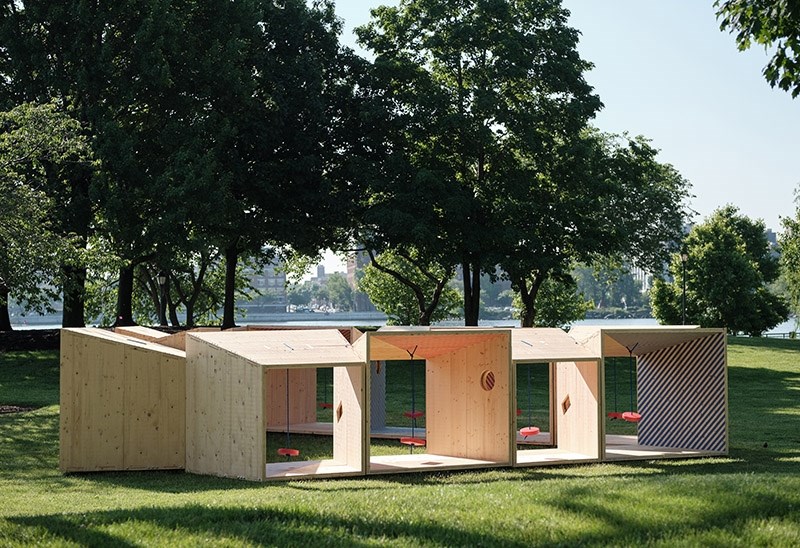 Salvage Swings was first installed in Lighthouse Park on Roosevelt Island in New York for the 2019 summer season. This project received a 2020 Small Project Award from The American Institute of Architects.

Alumni and faculty of the Fay Jones School of Architecture and Design have been recognized for design excellence by the American Institute of Architects and in the AIA Gulf States Region annual awards program.

“Congratulations to the school’s faculty and alumni for these recognized national and regional achievements in architectural design,” said Peter MacKeith, dean of the school. “These awards and recognitions further confirm that the design education provided here is one of design excellence at all scales, and across locales, material palettes and typologies. Such recognition furthers our efforts in student and faculty recruitment and builds our morale all the more.”

Salvage Swings, a project by Somewhere Studio, a faculty-led practice, recently received one of seven 2020 Small Project Awards handed out by the national American Institute of Architects. This honor recognizes small project practitioners for the high quality of their work and promotes excellence in small project design.

Using leftover construction materials from a University of Arkansas building project, this pavilion design explored the ways such materials can be diverted from landfills and made into an engaging and fun space for both children and adults. The pavilion consists of 12 repetitive modules that frame swings and views of the surrounding landscape. The open framework of the pavilion allows the flexibility to host a variety of activities, including picnics, concerts and hide-and-seek games.

It won the 2019 City of Dreams international pavilion competition, and the pavilion was first installed on Roosevelt Island, a narrow strip of land that sits in New York’s East River, for the 2019 summer season. It was then installed on the lawn of Vol Walker Hall during the fall 2019 semester, before being relocated to its current home at the Scott Family Amazeum in Bentonville.

One jury member called this “a tremendously successful project, and a great amenity for the public. I love the reuse of materials and the many different ways the ‘building blocks’ can be combined.” The jury also noted that “the novel design shows great clarity, rigorous thought, and careful execution. The reuse of materials, calibration of material use, and construction techniques deliver a project in which the whole is greater than the parts, but where the parts have been given equal consideration to the whole.”

Architects from the Gulf States Region of the American Institute of Architects assembled recently via Zoom to celebrate that organization’s 2020 Design Awards. The awards program identifies built works of distinction and strives to promote the excellent work done by architects practicing in Alabama, Arkansas, Louisiana, Mississippi and Tennessee.

Of the 131 projects submitted for the competition, the jury recognized 17 projects for their exceptional choices in lighting, materials, color palettes, sustainability and overall design excellence.

Michael Lejong, AIA, principal with MAHG Architecture in Fort Smith, served as this year’s Design Awards Chair and assembled a group of design professionals to jury the entries. Ric Abramson, FAIA, head of the Urban Design and Architecture Studio for the City of West Hollywood, California, led the group as jury chair. Other jury members were Karin Liljegren, FAIA, of Omgivning, in Los Angeles, California, and Dan Brunn, AIA, of Dan Brunn Architecture, also in Los Angeles. The jury noted the wide variety of project types and styles submitted and commented on the exceptional work being done in the region.

Bradley Edwards, principal with Bradley Edwards Architect, received an Honor Award – Interiors for Onyx Coffee Lab in Bentonville, Arkansas. Onyx Coffee Lab in the Momentary (Monyx) is a third-wave coffee bar and café located in this former Kraft cheese factory now converted into a contemporary art museum. Drawing inspiration from the vast network of machinery within the museum, Onyx was originally conceived as a meditation on the duality of human and robot. A simple material palette of terrazzo tile, white perforated metal and glass create a soft, luminous interior. Edwards, AIA, is a 1993 graduate of the Fay Jones School.

Jury members called Onyx Coffee Lab “the essence of place making. Here is a new space, new tenant and use that is melding their identity to the historical and current use of the building they sit within. This interconnection is not often considered in tenant spaces. All the while they are creating a completely unique sense of place that is theirs as it is beautiful and inviting.”

The Innovation Lab is the heart of the Lamplighter School, whose campus master plan was designed by the architect O’Neil Ford. Programmed with hands-on learning classrooms, including a woodshop, robotics lab, and teaching kitchen, the building suggests a holistic approach to design, systems and learning with a relationship to the natural environment. The jury approvingly noted “the spaces created by the intersections. Typically this many angles can create tension, but in this project, they create flow.” Blackwell is also a Distinguished Professor and the E. Fay Jones Chair in Architecture in the Fay Jones School, and he received the AIA Gold Medal and was named Southeast Conference Professor of the Year, both in 2020.

Salvage Swings, which also won a 2020 AIA Small Project Award, was made using cross-laminated timber salvaged from the shipping palettes of a U of A campus construction project, Adohi Hall. The pavilion consists of 12 repetitive modules that frame swings and views of the surrounding landscape, and it is currently installed at the Scott Family Amazeum in Bentonville. The jury noted that “the strength of this project is that is creates an abundance of exploration through minimal architecture and minimal means.” Sharpless is an assistant professor of interior design in the Fay Jones School.

The Jacksonport State Park Visitor Center, located at the confluence of Arkansas’ White and Black rivers, celebrates a historically significant port town, while lifting visitors above a levee to reunite river and town, past and present. Conceived as a modern dogtrot, the center juxtaposes two glass cubes embedded in earth representing a divided North and South under one roof connected by a bridge. The jury appreciated the siting of this project, “connected to the ground in a formal yet functional way. Juxtaposing the ridge seating with the earth berm seating allows different conversation areas for large groups.” Rowland is a 1990 graduate of the Fay Jones School.

A Merit Award – Interiors went to Marlon Blackwell for CO-OP Ramen in Bentonville. This project is a casual dining restaurant honoring the Japanese aesthetic of wabi-sabi. The materials are ordinary, made extraordinary through articulation, supporting a union of roughness and refinement.

A Merit Award – Renovation and Restoration went to Jason Jackson for Idlewild Presbyterian Church Education Building and Entryway Expansion. This project is a modernization of an iconic, religious building in midtown Memphis, Tennessee, including a new entryway, a new early childhood education center and ADA improvements. Jackson, AIA, is principal with brg3s architects in Memphis, Tennessee, and he is a 2006 graduate of the Fay Jones School.

A Merit Award – New Construction went to Chris Baribeau for Adohi Hall on the U of A campus in Fayetteville. The 202,027-square-foot, 708-bed sustainable residence hall and living-learning community is the nation’s first large-scale mass timber project of its kind. Connected by a ground-level passage, a serpentine band of student rooms defines three distinctive courtyard spaces that create a dynamic environment for interactive learning in architecture, design and the arts. Baribeau, AIA, is founder and principal at Modus Studio, and he is a 2003 graduate of the Fay Jones School.

by admin
1
No Result
View All Result