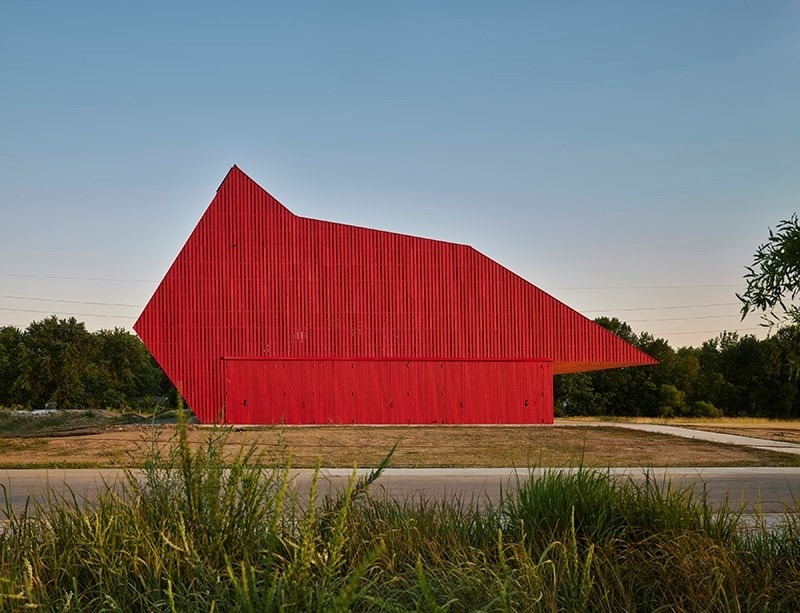 The Thaden School Bike Barn, a project by Marlon Blackwell Architects, won in the Institutional K-12 category in the 2020 AN Best of Design Awards, an annual competition sponsored by The Architect’s Newspaper.

Projects designed by Fay Jones School of Architecture and Design faculty and alumni were recently recognized in the 2020 AN Best of Design Awards, an annual competition sponsored by The Architect’s Newspaper.

The University of Arkansas Community Design Center, working with the U of A Resiliency Center and Urban Works, along with Marlon Blackwell Architects, an architecture practice led by U of A professor Marlon Blackwell, won recognition for three projects. A U of A campus project designed by Modus Studio and its collaborators also was recognized.

The AN Best of Design Awards is a premier North American awards program open to design professionals for interiors, buildings, landscape, urbanism and installations in the United States, Mexico and Canada. This year’s awards program saw more than 800 entries in 50 categories.

Marlon Blackwell Architects won in the Institutional K-12 category for the Thaden School Bike Barn and also received an Honorable Mention in the Commercial Hospitality category for CO-OP Ramen.

Blackwell is founder and co-principal of his Fayetteville-based design practice. He is a Distinguished Professor and the E. Fay Jones Chair in Architecture at the U of A. He received the 2020 Gold Medal from The American Institute of Architects and was named the 2020 Southeastern Conference Professor of the Year.

The Bike Barn in Bentonville, sited on a berm along the eastern edge of the Thaden School campus, transforms the vernacular of the region into an athletic facility that houses a multi-use court, bike storage and support facilities. Akin to a barn raising, 12 locally fabricated wood trusses were hoisted into place above dimensional wood columns with steel flitch plates, revealing the profile of a modified gambrel barn carved into the space of the interior.

With the exception of the storage and restroom, the entire space is naturally ventilated through open joint red-painted cypress board siding, vented skylights and a series of roller doors that open up the barn to the surrounding landscape.

CO-OP Ramen is a casual dining restaurant in Bentonville that embraces the Japanese concept of wabi-sabi, which celebrates the asymmetries and imperfections in rough and natural objects. The building materials are ordinary but made extraordinary through texture, pattern and light, supporting a union of roughness and refinement.

Two primary elements, plywood and concrete block, were used in the design. The double-sided finish plywood was selected for its variation and inconsistency in grain. Each piece of plywood has black or white painted edges, adding a touch of graphic refinement to the organic roughness of the material. Carefully laid concrete block walls surround the space, softened by a 12-foot-tall living green wall.

The Community Design Center received an Editor’s Pick in the Unbuilt-Education category for the Wahiawa Value-Added Agricultural Product Development Center.

The Wahiawa Value-Added Product Development Center in Wahiawa, Hawaii, repurposes an existing downtown warehouse as a food innovation maker space for college students. Projects will focus on the incubation and commercialization of value-added food products through the recycling of nearby agricultural waste streams.

The Community Design Center is an outreach program of the Fay Jones School led by Steve Luoni, a Distinguished Professor and the Steven L. Anderson Chair in Architecture and Urban Studies. Luoni and his team worked with Urban Works Inc., an architectural firm in Honolulu, Hawaii, and with the U of A Resiliency Center. The Resiliency Center, led by Marty Matlock, executive director, is an interdisciplinary research, education and outreach center hosted by the Fay Jones School, in collaboration with the Sam M. Walton College of Business and the College of Engineering at the university.

The Wahiawa center is part of an island-wide portfolio of cooperative food hubs and facilities being developed by the Hawaii Department of Agriculture to support the development of local food supply chains.

The design reorganizes the big box structure of the existing warehouse into a series of three lofts: a public loft for visitor events and product sales; a production loft for product design, processing and packaging; and an administration loft with classrooms, conference space and an office area. Strategically carved courtyards in combination with new roof monitors introduce natural light and exterior views into an otherwise windowless interior. New cladding of gold-colored metal skins — in solid and perforated layers — provides updated public frontages on Wahiawa’s main commercial street.

The design team for Adohi Hall at the U of A won in the Mixed-Use Residential Category. The residence hall, which opened in fall 2019, was designed by Leers Weinzapfel Associates of Boston, Modus Studio of Fayetteville, Mackey Mitchell Architects of St. Louis and OLIN of Philadelphia. Fay Jones School alumni Chris Baribeau, Josh Siebert and Jason Wright are principals of Modus Studio.

Adohi Hall is a 202,027-square-foot, 708-bed sustainable residence hall and living-learning community at the U of A, as well as the nation’s first large-scale mass timber project of its kind. An emphasis on nature resonates throughout the project, with exposed structural wood ceilings and wood columns present throughout the building. A serpentine band of student rooms defines three distinctive courtyard spaces that create a dynamic environment for interactive learning in architecture, design and the arts.

Integrated into the topography of its site, Adohi Hall features a cascading series of outdoor spaces with sinuous pathways intricately woven through existing stands of mature oak trees.

Additionally, another Arkansas project, Railyard Park in Rogers, won in the Unbuilt Landscape category of the awards program. It was designed by Ross Barney Architects and AFHJ Architects.

by admin
0
No Result
View All Result